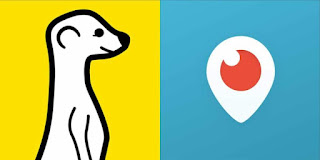 It's no surprise the live video streaming apps for twitter are popping up everywhere, but there is a distinct battle going on between Meerkat and Periscope. Meerkat stood a chance as it was approaching the top of the 100 most used apps list until Twitter launched its rival, Periscope just one month later. Both apps are extremely similar and rely on Twitter as a platform to stream live videos. However there are differences between the apps including appearance, saving capabilities, auto-tweeting, and 24-hour replay. Adding either app to your iPhone will allow you to capture raw moments that might have otherwise seemed too small to publicize.

Which app will you choose?

June 24, 2009
Yes, you can practically put your logo on anything---just use your imagination, but we went to the ASI Show in Las Vegas to find new ways to help our clients be original. Burke Advertising is a member of ASI, (Advertising Specialties Institute) and we are always looking for new promotional opportunities. As ASI members, we have great options and a simple process to find the right premium or incentive for our client's promotions. We attended the ASI Show in Las Vegas and had the chance to expand our creativity as well as see new promotional items. Here are a few imaginative programs we recently used for our clients. Music Download Cards You can give your customers or prospects a reason to visit your web site with free music. Give them a download card with your name and logo that promotes your domain and links to thousands of songs. For less than the cost of a song you can get plastic cards to hand out at trade shows or to daily prospects. This promotion has a long shelf life and
Read more
February 07, 2020
"Neither snow nor rain nor heat nor gloom ... will stop our video crew from getting to their shoot" On location today at The Prescription Center.  # videoshoot   # videoproduction   # burkeadvertising   # onlocation
Read more
February 03, 2020
Towle Whitney is a premier manufacturer of water pressure booster pump systems. We gave them a boost with new content, graphics and SEO strategy. Take a look at  towle-whitney.com.   # WebUpdates   # SEO   # BurkeAdvertising
Read more